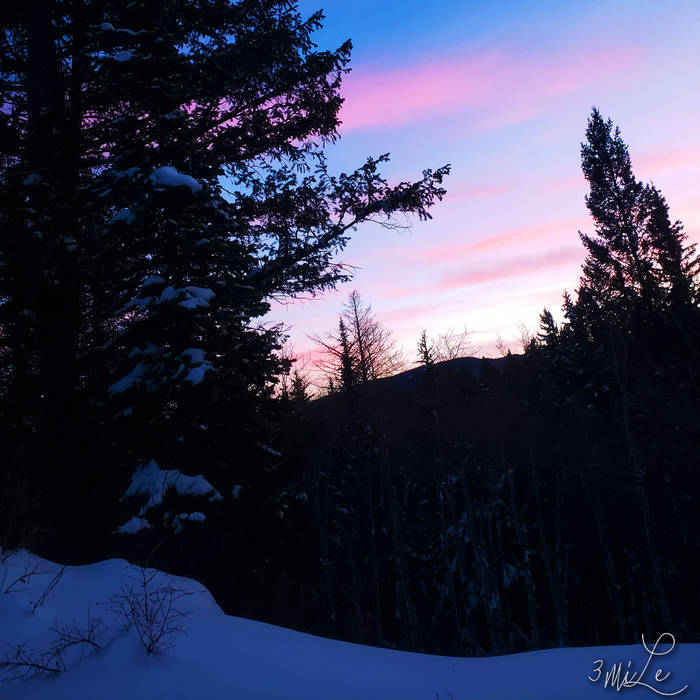 Pivoting in his seat, LuSiD was critical of the scene at hand; The smokey noir of phosphorescent lights dimmed amongst a nicotine fog, and the sultry romp of revelers deep in a cocktail of conversation, flirtation, coercion, and libation. Cold winter nights beget warm rooms and warmer beds, and no one in this room was going to theirs alone. Had the woman in the maroon dress with those loud, bangled earrings not dropped her cigarette on his table, he wouldn’t have noticed the hand, the letter. The only visual trait to imprint, the only trail to follow, was that ring on his left index finger. The emerald at the center shined like a steel furnace coated in a coal-black visage. By the time LuSiD realized it, the letter was placed into his own hands. It was blank if but for a set of coordinates, a date, and a crude scribble; 3mile.

White tuffs cascading over frozen foliage, the scent of pine and dead bark. Low clouds were like a quilt covering the the hidden fjord, coating the landscape in a shadowless, gray expanse. LuSiD was trying to get a gauge for the situation, trying to determine if he'd reached the coordinates. The compass read clearly, the maps were up to date, and the only thing in his field of view was a mountain range stretching far higher than the misty ceiling. At an instant, a silent snowmobile rolled up and to his left, with a posh, peculiar captain. No words were traded, no glances exchanged. They rode towards the peak in total silence.

Higher and higher still, the depth of the snow became an ocean swallowing the landscape. Entire elder trees sat buried in the powder up to their first branches. The gale whipped and stirred the bare limbs, shaking them free of their frozen dust, leaving a shroud of bleach-white film along the damp wood. LuSiD was wary of the ascent; though they had been moving for just a few minutes, each second brought about heightened anxiety. In the aftermath of their blind jaunt up towards the mountain peaks, a rustic cabin sat upon rare, flat earth.

Warmth and security emulsified the air around this wooden hideaway, with a strangely familiar man in the doorway. LuSiD made no move to judgement, no twitch in deference to his suspicions. His spectral host made his introductions, dancing his fingers as he spoke, that all-to-recognizable emerald ring shining out from its jet black cage: “I am Lusidoro, and it is my utmost pleasure to welcome you to 3mile.”

The situation was like some kind of fucked up projection out of LuSiD's own mind; Five of them total. Same height, same age, same hairline, same overworked brow. Completely different characters, but very much the same person. Introducing themselves with no fanfare and little affection, L-Bow, Kachow, and Loretta were a bedraggled bunch, a complete set of distorted caricatures of LuSiD's very identity. The focal point, though, was always Lusidoro, that emerald rock staring out from his hand like a coiled serpent waiting to bare its fangs.

The spoils of 3 Mile kept the guests entertained, if only to a dubious extent. The plush, marshmallow world that was the surrounding mountain top would have surely made for a raucous occasion, if not for the mounting suspicions LuSiD was beginning to brood on. Everything was almost perfect, but some foreign tint to the air around Lusidoro, some permeable aura, kept LuSiD on constant guard.

Winding corridors that seemed altogether too large to fit in such a small cabin were beset with lupine limestone fireplaces, flames constantly in flux. Blood red carpets stretched into blooded mahogany floors, and an innocuous, heart-shaped archway invited LuSiD and his doppelgangers into a posh, euclidean dining hall. As the troop of stalwart guests made their way to the available seats, the very atmosphere of the room began to shift in form and color, distorting and fractalizing to a point of visual whiplash and discord. Standing at the center, and always at the center, was Lusidoro.

Bandcamp Daily  your guide to the world of Bandcamp